She was a writer, a gifted oral storyteller, a playwright, a teacher, a social worker, a mother and grandmother, my best friend, the love of my life. She received the Bram Stoker, International Horror Guild, British Fantasy, and World Fantasy Awards for her writing, which included almost a hundred short stories, twelve solo novels, and numerous plays, poems, and storytelling performances. Among her novels: Prodigal, Wilding, Revenant, The Yellow Wood (her last), and Black River, a fictional exploration of grief as a hero’s journey. As a social worker and administrator she worked for the elderly, the disabled, and adoptive children and parents. A speech of hers on unconditional commitment is still used in parts of the country in the training of prospective adoptive parents.
She was born Melanie Kubachko on April 11, 1949 and grew up in Saegertown PA. She attended Allegheny College as an undergrad, and earned her master’s in social work at the University of Denver in Colorado. When we married my name was Steve Rasnic. We chose the joint surname Tem.

Our life together was about writing and literature, art and music, children and grandchildren, good humor, and our love for each other. More than anyone I’ve ever known she was committed to good works and trying to do the right thing, and at a time when people are deeply divided over religion and politics she always tried to respect other people’s beliefs and opinions even when she didn’t understand them. I learned from her that even at its worst life is infinitely interesting, a lesson that got me through the death of our son Anthony in 1988, and which we wrote about in The Man on the Ceiling, a lesson which still strengthens me through each passing day. 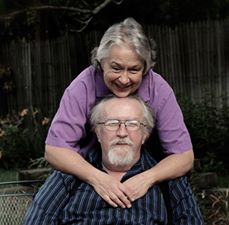 MELANIE TEM's chronicles of the terrors that haunt families and the amazing resilience of the human spirit have collected a World Fantasy Award, a Bram Stoker award, a British Fantasy Award, and praise both here and abroad. Stephen King said of her first novel, Prodigal, "spectacular, far better than anything by new writers in the hardcover field." Dan Simmons declared it "A cry from the very heart of the heart of darkness . . . Melanie Tem may well be the literary successor to Shirley Jackson."

“Fry Day,” at The Horror Zine